Our Birthday Lunch Event was a great success!
Our first event of the year was held at on Saturday 24th March 2018 at The Cut, Shropshire Wildlife Trust’s centre at Abbey Foregate, Shrewsbury. This historic building surrounded by a delightful walled garden was a perfect venue and fitted so well with the themes of our speakers.
Dr Gladys Mary Coles set the scene with her talk entitled “Mary Webb The Naturalist.” The young Mary Meredith grew up in the Shropshire countryside and from an early age was fascinated by nature and the folklore of the county. Her beloved father was a considerable influence and helped to shape her knowledge and natural gifts. Her immersion in nature permeated and inspired her literary output and greatly impressed those in literary circles particularly during her time in London, eg Rebecca West, Walter De La Mare and Martin Armsrong.
It was through Armstrong that she was offered review work for The Spectator. This was mainly to review nature books which were popular after WW1. Gladys Mary described the reviews as being like “sitting with Mary” This little known aspect of her work provides a unique insight into the character of Mary Webb, showing the depth of her knowledge,her quest for accuracy but also her empathy for the writer. Reviews can be found in “Collected Poems and Prose” by Gladys Mary Coles.
After an excellent lunch by Wendy Oakley 33 members settled back to listen to an illustrated talk by member Tom Hughes.
In his talk called “Pilgrimage in Medieval Shropshire” Tom made reference to Mary’s final and unfinished novel set in the Medieval period: “Armour Wherein he Trusted”
Tom is an entertaining knowledgable speaker with the style of a true storyteller. We were taken on the pilgrim’s hazardous journey, complete with hat and props in their quest to reduce the long period in Purgatory.
The talk concluded with a performance on the bagpipes of a typical tune. Another of Tom’s many talents.
Thanks to all involved in making this event such a joyful and enlightening one. 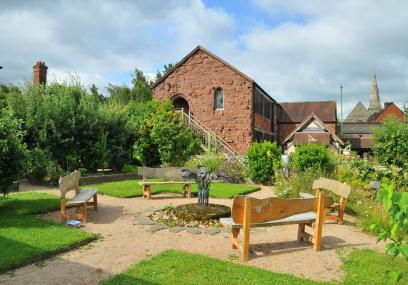 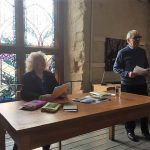 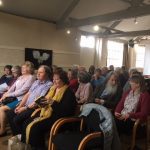 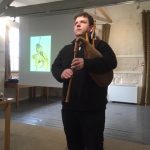 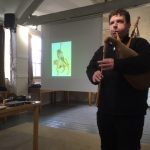 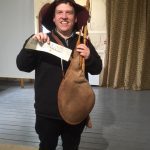 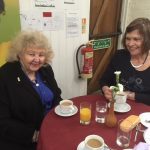 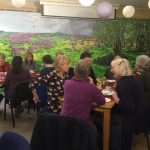 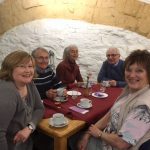 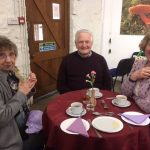 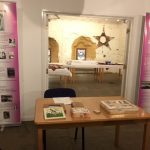