It was an absolute joy to meet again in Church Stretton at one of our regular venues, St Laurence’s Parish Centre.

The event was really well-attended with 26 members, more than we could have expected for our first event after so long. It was held with socially – distanced chairs and optional mask-wearing. There is just no substitute for face to face meetings and there was a lot of catching up to do! Chairman Gordon Dickins called us all to order for a very informal AGM. Gordon thanked committee members for working behind the scenes to continue to promote Mary Webb and keep members in touch by means of the biannual newsletters. There have been several important issues for the committee to be involved in during 2020, in particular, Spring Cottage, the Shrewsbury Big Town plan and the restoration of the Flaxmill/Maltings restoration in Shrewsbury. All the current committee were willing to stand for a further year and there are no vacancies at the moment. There followed a discussion where members were able to put forward suggestions for events to celebrate our 50th anniversary year in 2022. Another notable event to celebrate next year will be the centenary of the publication of Seven for a Secret. It’s so good to have something to look forward to after such a difficult eighteen months.

Members were invited to make their own arrangements for lunch in any of the lovely cafes in Church Stretton.

Satire and Prophecy in the House in Dormer Forest

Gladys Mary expressed her delight to be back amongst friends. She  stated that House in Dormer Forest  was her favourite book and would be her choice to take to a desert island! According to Gladys Mary this novel was much misunderstood by the public, failing to appreciate the irony and allegory of the novel. The older members of the Darke family represent the old archaic order with its rigid class structure and rituals, which is echoed by the old claustrophobic house in its oppressive landscape. The younger family  members are seeking to break away and follow their own dreams and aspirations. The novel was written entirely at Spring Cottage, Lyth Hill during the post war period when people were still reeling from the horrors of war and were seeking  ways to prevent humanity sinking further  into despair.  Despite these powerful themes, the novel is the most populated with well drawn and often comical characters. Mary’s descriptions of the dysfunctional family represent a microcosm of the “upstairs/downstairs” life which was prevalent in Victorian England. The climax of the novel sees the tyrannical grandmother Velindre burning the house, possibly symbolising the start of a new era as expressed in the epigraph at the start of the book “Let the sleeping soul awake.”

After such a stimulating and thought-provoking talk, which we have come to expect from Gladys Mary, members were invited to read a favourite passage from the novel. After a cuppa and a last chance to browse the book sale, it was time to head off home after a happy meeting of old friends and new, and to look forward again to a Christmas lunch at Bishop’s Castle on Saturday 4th December. Felt like old times! 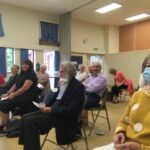 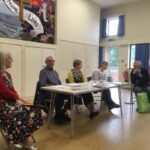