Summer School is the highlight of the society’s calendar and 2018 didn’t disappoint.

Forty members gathered in the sunshine at Clun Memorial Hall set in glorious south Shropshire. This picturesque riverside town has plenty to offer visitors both in the town and the surrounding countryside, surveyed by the dramatic ruins of its 13th century castle.

This was the perfect setting for both the summer school and Gordon’s walk. The town was bustling with activity with open gardens and a cycle event. It certainly wasn’t one of “The quietest places under the sun”

Our programme for the day, appropriately had a theme of Literary Pilgrimage and Literary Tourism.

Secretary Sue Higginbotham read out a letter from Honorary Vice President Donald Meredith, nephew of Mary Webb. He wished everyone a successful weekend and expressed his thanks to the committee and members for their endeavours to keep his aunt’s memory alive.

Dr Gladys Mary Coles, in her talk, “Early Pilgrims to the Mary Webb Country” explained that although pilgrimage is usually associated with religious places, it could also mean “A place made special by its associations.” As people became more educated, literary pilgrimage became more common and people started to visit places such as the Lake District and the Yorkshire moors to experience the land of inspiration of Wordsworth and the Brontës. The railways also made these places more accessible and literary pilgrimage grew.

When Mary Webb lived in London, she was pleased to be invited to a Dickins Fellowship ball where she dressed as Madeline in Nicholas Nickleby.

In April 1928, 6 months after Mary’s death, Prime Minister Stanley Baldwin praised her work at a Royal Literary Fund dinner and lamented the fact that her work was not more widely read.

This speech led to a resurgence of interest in her work and the subsequent reprinting of The Golden Arrow and Precious Bane. New readers were keen to explore the special landscape of Shropshire and made the journey even in Mary’s lifetime.

There was a vogue for the countryside after the war and charabanc tours started to appear with eager visitors.

Gladys Mary described one of the first such pilgrims, an American, Ann Getchel from Boston, U.S.A. She was a literature student who loved Precious Bane and wanted “to put myself in closer touch with the spirit and work of Mary Webb.”  She wrote to Henry Webb, and in his reply he advised Ann on the places to visit. He also advised her to contact their good neighbour Mrs Thorne who would  show her around their home, Spring Cottage on Lyth Hill “where her spirit still lives”. Ann stayed with Mrs Thorne at The Firs and learnt a lot from her about Mary. She also went with Jack Thorne to visit Mary’s grave in Shrewsbury cemetery and the location of Mary’s stall in Shrewsbury market.

Other Americans also came which increased awareness in the U.S

Another memorable pilgrim was Magdalene Weale who sought out Mary’s land of inspiration on horseback. Her book “Through the Highlands of Shropshire on Horseback” published in 1935 is now rare.

Gladys Mary Coles herself could also be described as a literary pilgrim in her quest to bring Mary Webb to a wider audience. Her extensive and tenacious research conducted over several years revealed information not featured in earlier biographies. The resulting biography The Flower of Light published in 1978 is a must read for all those with an interest in the life and work of Mary Webb.

Following on from Gladys Mary, our second speaker was Gareth Roddy with a talk entitled“Literary Tourism in Shropshire,” a subject he has covered in his PHD thesis.

Gareth was inspired by the literature of Shropshire in the early twentieth century and the growth of tourism in the borderlands. He researched guide books, travel logs and literature of the time to explore the reasons for the desire to escape everyday life and to seek the places of the authors’ imagination. Gareth cited various themes for the popularity of Shropshire:

Borderland between England and Wales with its history of conflict

Nostalgia for the past, quest for a rural idyll

Mary Webb’s use of dialect, legend and folklore in her novels together with the intriguing use of imaginary place names continues to attract visitors to this beautiful county.

After a delicious lunch prepared by Wendy Oakley and her team, members were given various options for the afternoon:

A photograph walk with chairman and landscape photographer, Gordon Dickins

A visit to the studio of Jemma Pearson, creator of the Mary Webb bronze bust

A visit to the open gardens of Clun

What a truly stimulating day for Mary Webb pilgrims covering all the elements described in our talks.

There was great enthusiasm to continue the mood of exploration and immersion in the landscape to join Gordon’s walk on Sunday.

Gordon Dickins’ annual walk has long been a tradition of our annual summer school and Gordon never fails to lead us into corners of Shropshire which lift the spirits and demonstrate the diversity of this county. It can also be challenging at times especially in the hilly terrain around Clun. When Gordon says “this is the last hill,” we’ve learnt to take it with a pinch of salt!

We climbed the stiles, walked through ripening wheat and barley and marvelled at the spectacular views, chatting, getting to know each other better and sharing in Mary Webb’s “warmship.” 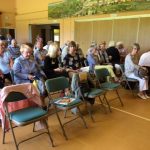 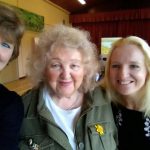 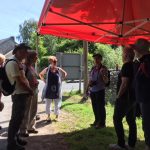 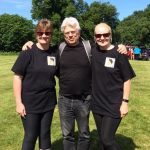 Welcome to Kjell all the way from Norway 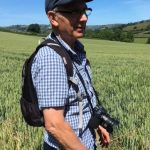 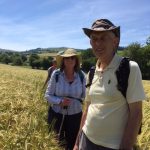 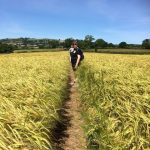 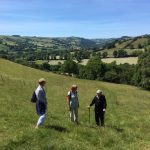 This is steep Gordon! 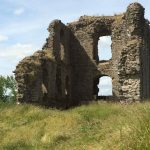 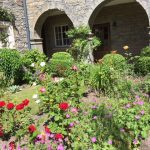 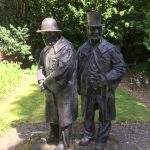