The pretty village of Leighton, the birthplace of Mary Webb  is situated at the southern foot of The Wrekin and close by the meandering river Severn. It is situated on the Ironbridge to Shrewsbury road

Mary Webb was born Mary Gladys Meredith at Leighton Lodge on 25th March 1881 (Lady Day). The Lodge in the grounds of Leighton Hall is a substantial red brick house now in private ownership. It was here that her father George Edward Meredith, an Oxford M.A. had a small boarding school preparing boys for entrance to public schools. The family lived here until 1882 when they moved to The Grange at Much Wenlock. 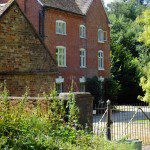