Longner Hall in Atcham was the setting of “Undern,” home of Squire Jack Reddin in the 1950 film of Gone to Earth.

The owners Mr & Mrs Burton are opening the  beautiful gardens  to the public on Sunday 28th May from 2-5pm.

In aid of Atcham Church.

Historian Keith Pybus has sent this interesting snippet about one of the Burton ancestors:

Perhaps the most famous of the Burtons was one Edward, who, as a zealous Protestant in the time of Catholic Queen Mary, was often on the run. One day in 1558 he could hear the sound of church bells in Shrewsbury, and, knowing that Queen Mary was dying, he sent his son to Shrewsbury to see if her sister Elizabeth, a Protestant, had acceded to the throne. He told his son that when the young man could see Longer Hall from the road he was to throw his hat into the air if Elizabeth had indeed acceded. His son did just that, but old Edward was so overcome with emotion that he died on the spot. It is said that the clergy of St Chad’s Church in Shrewsbury declined him burial, but as his will stated that ‘no mass-monger should be present at the funeral’, the clergy (who were all Catholic) would have little option but to decline to bury him. So he was buried in the garden at Longner, and his tomb is still there. 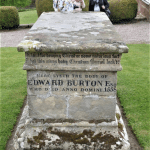