Report on Summer School and Concert 2019 at Ludlow

Summer School 2019 has surpassed all our expectations. The beautiful town of Ludlow (Mary Webb’s Lullingford) was the perfect setting for our annual gathering.

The Mascall Centre  provided everything we needed for a successful day including lunch and overnight accomodation. The programme for the day:

2.30 -3.30     Talk by Professor Deborah Wynne  “Literary Textiles with Reference to the Work of Mary Webb”

Juliette Binfield, great niece of Mary Webb read out a letter from her father Donald Meredith, Honorary Vice President of the society. Donald apologised for not being able to attend but was happy that two of his daughters were able to represent the family. Donald thanked the committee and members for all their hard work in keeping his aunt’s memory alive. He is currently re-reading and enjoying “The Spring of Joy” and Mary Webb’s short stories.

In her early life at Much Wenlock she grew up in a household where music was a significant feature of family life. Both parents liked to sing and the family often gathered around the piano to sing traditional songs and hymns. Her father, George Edward Meredith would perform poetry and songs for charity. Mary was taught to play the piano from an early age.

At the age of nineteen Mary suffered her first bout of Graves Disease which affected her singing voice, rendering it much deeper. Mary found this distressing as she loved to sing and was a member of the choir at St Andrews when the family moved to Stanton -on-the-Hine Heath. She continued to play the piano, including Mozart, Chopin and Beethoven. Her favourite piece was Beethoven’s Moonlight Sonata. It could be said that the deprivation of her singing voice led her to concentrate on her writing, and it was during her recuperation that she embarked on her nature essays which became “The Spring of Joy.”

When the family moved to Maesbrook at  Meole Brace, Mary met and eventually married Henry Webb, whose family had moved there from Ironbridge. After their marriage in 1912 and following a period of living in Weston Super Mare, Mary and Henry returned to Shropshire and set up home at Rose Cottage in Pontesbury. Mary had inherited the grand piano from Maesbrook and it was duly installed at Rose Cottage to serve both as a dining table, covered in a gingham cloth and a writing desk. Mary sat on the piano stool to write. This stool which Mary had given to a neighbour’s daughter after the piano had to be sold, was to reappear in a Mary Webb Society auction in 1990! The owners had found the stool in very poor condition, riddled with woodworm, in an outhouse, and had brought it along to the auction. Gladys Mary was determined to purchase the stool, and despite feverish bidding from a “mystery man,” the stool was hers! However her delight was not shared by her husband, who refused to have it in the house until it was treated. The stool is a precious possession and a source of inspiration at times.

Gladys Mary gave examples of how music was to permeate Mary Webb’s work. In The Golden Arrow, songs and hymns are woven into the narrative and plot, which create a sense of authentic rural life. She also wrote the song evoking the legend of The Golden Arrow. The music was inspired by a group of revivalists which shehad  heard on a train singing the hymn “God be with you until we meet again.”

In Gone to Earth, music plays a major part both in defining the characters and moving the plot. Hazel Woodus is an untutored natural singer whilst her father, Abel is a skilled harpist. Abel actually met his gypsy wife at an Eisteddfod. Abel and her father play at a country fare, and it is here that during her rendition of “Harps in Heaven” that Hazel  captures the heart of the Reverend Edward Marston. Music also plays a part in Hazel’s downfall when she uses her mother’s book of charms to determine whether to meet Squire Reddin, who is also captivated by Hazel, at Hunter’s Spinney. Her perception of The “Fairy Music” as her signal to meet Reddin turns out to be the wind rippling through her father’s harp.

In Seven for a Secret Gillian Lovekin wants to be a successful singer in London. Her erstwhile lover, Robert Rideout wants to learn the art of writing Pennillions, a type of sung poem from Wales, in order to show his love for Gillian.

In “Armour Wherein he Trusted,” there is also reference to the gleemen who come to entertain Lord Powis -“swaggering in their ivy-coloured doublets and their long hose which he had gotten for them in London Town”…”Shall we sing “The song of the Beautiful Persons” asked the head gleeman?”…

There are many more references to music in Mary Webb’s work and indeed her poetry is an example of her keen musical ear, in its precise construction and use of words.

The works of Mary Webb, both poetry and prose have inspired and continue to inspire composers, for example: Beguildy, Johnny Coppin, and Richard Moult have all set poetry to music. In the USA Dennis Hyams has written an opera of The Golden Arrow and there is a musical based on Precious Bane in progress. The Village Quire and Pentabus have both devised excellent adaptations of Precious Bane with original music. The evocative score composed by Brian Easdale for the film of Gone to Earth echoes the drama of the plot.

Gladys Mary’s talk,  focussing on this little-known aspect of Mary Webb’s life and work, clearly demonstrates her knowledge and meticulous research and  set the scene beautifully for the evening concert. After the talk, Gladys Mary kindly allowed a few of us to sit on the piano stool, including Mary Webb’s two great nieces, Juliette and Lucy, and, appropriately our pianist for the concert, Robin Rubenstein.

Lunchtime is always an opportunity to socialise, to welcome new members and guests and to look at the displays. Thanks to Pea Green for our delicious lunch.

Sewing featured strongly in the lives of women at this time and there was seen to be a link between sewing and writing. An example of this was the working of intricate samplers by young girls –  not always a pleasurable activity!

Jane Austen was a detailed observer of clothing, she was an accomplished seamstress and made her own clothes. Needlework tended to be a group activity and conversations from these groups were to inspire her characters. Clothes could also define a character.

The Bronte sisters would sew and write together. Charlotte in particular wanted to escape traditional feminine roles; she was aware of the exploitative  power of mill owners in the local woollen mills and expressed this in “Something about Arthur” and referred to the Luddites in “Shirley.” An illustration of a sampler worked by Emily Bronte clearly showed the writer’s dislike for this tedious activity!

Elizabeth Gaskell was  concerned about social inequality and saw this for herself in the Manchester cotton mills. Her powerful novel “North and South” demonstrates her concern for the lives of the workers during the rapid industrialisation of the cities.

Deborah cited the poem “Anne’s Book” as an example of the use of textiles in the work of Mary Webb. Anne is so absorbed in the quest for a prize for her sampler that she is unaware of the natural world that she is trying to capture in her needlework. Other examples in Mary Webb’s work include the character of Mrs Cantlop in House in Dormer Forest who is defined by her obsession with tatting. The most obvious reference is the character of the weaver Kester Woodseaves in Precious Bane. Prue Sarn first meets Kester at a lovespinning, as the opening line of the novel goes..

The short story The Chinese Lion (1937) (Collected Prose and Poems  –  Gladys Mary Coles) tells the story of two lovers, Marcus and Juliet. Juliet is embroidering an overmantel for their future home based on a pattern on a Chinese plate which they called The Chinese Lion. When Marcus has to work away, Juliet passes the time  embroidering cushions and covers in the same intriguing pattern, never quite managing to work the Chinese lion to her satisfaction. As Juliet waits for months for Marcus to return, the embroidered furniture waiting, The Chinese Lion became a symbol of the couple’s love and longing to be reunited. As Juliet desperately waits for a cable from Marcus, she sees the figure of a Chinese Lion etched on her frosty window. She then knows that Marcus will return home safely.

Many thanks to Deborah for this very interesting talk which led me to think about a very poignant poem entitled “Unfinished Embroidery” written by Mary as she sat with her sewing at her dying father’s bedside in 1909. The poem ends,

” For when the work is spread before his eyes,

It must not seem too sadly incomplete.

So he may smile and say in glad surprise,

“Your work is very beautiful, my sweet.” 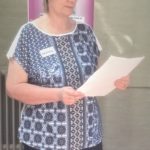 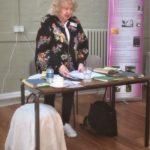 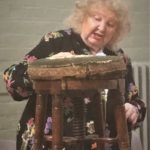 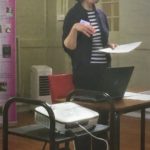 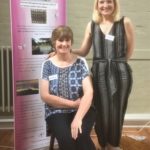 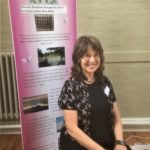 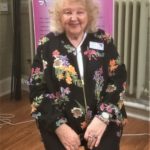 Concert   “The Joy of Music”  at St laurence’s Church, Ludlow

This historic cathedral-like church was the impressive venue for our summer concert appropriately titled The Joy of Music. The concert was introduced by Dr Gladys Mary Coles  and the evening was hosted by Gordon Dickins.

An evening of pastoral music to celebrate the Shropshire landscape of Mary Webb on the weekend of the summer solstice, interspersed with readings from her works.

Rachael reads the poem “The Dance”

Liz reads an extract from The Golden Arrow, a description of the Devil’s Chair

The concert was wonderful, a varied programme of music which would have been familiar to Mary Webb, played by world class musicians, including her favourite Moonlight Sonata, beautifully played by Robin Rubinstein on the impressive Steinway piano. The words of Mary Webb echoing around those timeless walls, on a summer evening in Shropshire. What more could anyone ask for? 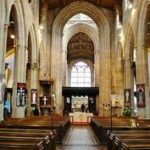 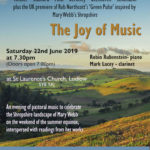 “The Joy of Music” poster 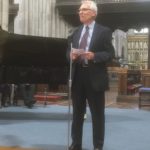 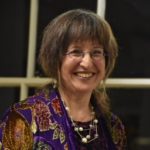 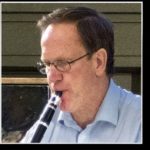 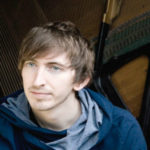 Videos from the concert