Shrouds of The Somme Campaign

Shrouds of the Somme. Bring Our Boys Home.

On 10th May, celebrated singer-songwriter and Patron of Shrewsbury Folk Festival, Steve Knightley, helped to launch a crowdfunding campaign to raise £150,000 by 19th June to take ‘Shrouds of the Somme’ to London for an extraordinary and moving memorial exhibition to commemorate lost soldiers of the Great War. Somerset artist Rob Heard will stitch shrouds by hand for 72,396 figures to represent all British servicemen killed at the Battle of the Somme whose bodies were never recovered.  For this enormous task, Rob needs our help.

Mary Webb would have known men just such as these, who went off to war and never came back.  She knew of the merciless and incessant slaughter of thousands upon thousands of our boys and saw for herself the devastatingly wounded soldiers returning from the Somme to the hospital and Red Cross centres in Chester.  Missing her three brothers, all away at war and worrying about their fate caused her great anxiety throughout the duration of the conflict.  Mary’s poem, ‘The Lad Out There,’   written at the time, movingly evokes the anguish that would have been shared by everyone back home.

The 2017 Centenary of the publication of Mary’s second novel ‘Gone to Earth’ happens to coincide with the launch of the ‘Shrouds of the Somme’ campaign and was itself Mary’s heartfelt response to the devastation and tragic consequences of war, most poignantly seen in the Battle of the Somme.  The Battle of the Somme was one of the bloodiest in history, claiming the lives of more than a million people from both Allied and German forces.  Recognising how difficult it is to visualise the vast numbers involved, Rob came up with the idea of making 19,240 shrouded figures to commemorate all those who fell on the first day.  He then exhibited these figures locally in Bristol and Exeter in the 2016 Centenary of the Battle of the Somme.

Rob’s new centenary exhibition is a hugely important piece of community art and one of the largest memorial projects ever staged.  Planned to be a quarter of a kilometre long, it will contain hundreds of shrouded figures laid out row upon row.  All of us can help to make this happen by supporting the campaign to raise the money needed for materials and to support Rob during the 18 months it will take him to create all of these twelve inch figures and complete the exhibition in time to mark the Centenary of Armistice Day on 11th November 2018.

For this exhibition Rob will remember every single one of the 72,396 lost servicemen of the Somme, not as a number but as a man who left behind his home, his livelihood, all those he loved and all who loved him.  Each one went to fight for his country and never returned and every one of their bodies is still lost in France.  Together, we can help Rob to remember their sacrifice and honour their memory.

‘Shrouds of the Somme’ please visit:

Steve is currently performing gigs throughout

returns to Shropshire to perform over the folk

With thanks to member Sue King for this article and for bringing this important campaign to our attention.

We are sure it would have been close to Mary Webb’s heart. Her poem must surely resonate with anyone who has loved ones in war torn places around the world today.

THE LAD OUT THERE

Oh, Powers of Love, if still you lean,

Above a world so black with hate,

The loving heart is desolate,

Look down upon the lad I love,

(My brave lad, tramping through the mire) –

I cannot light his welcoming fire,

Light Thou the stars for him above!

Let him in his long watching know

That I too count the minutes slow

And light the lamp of love for him.

The sight of death, the sleep forlorn,

The old homesickness vast and dumb –

Amid these things, so bravely borne,

Let my long thoughts about him come.

I see him in the weary file;

So young he is, so dear to me,

And wistful eyes and cheerful smile.

However far he travels on,

That flies the stormy seas again

To lands where her delight is gone.

Whatever he may be or do

While absent far beyond my call,

Bring him, the long day’s march being through,

Safe home to me some evenfall! 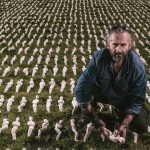 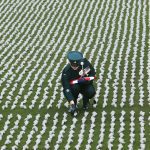 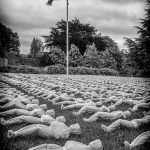